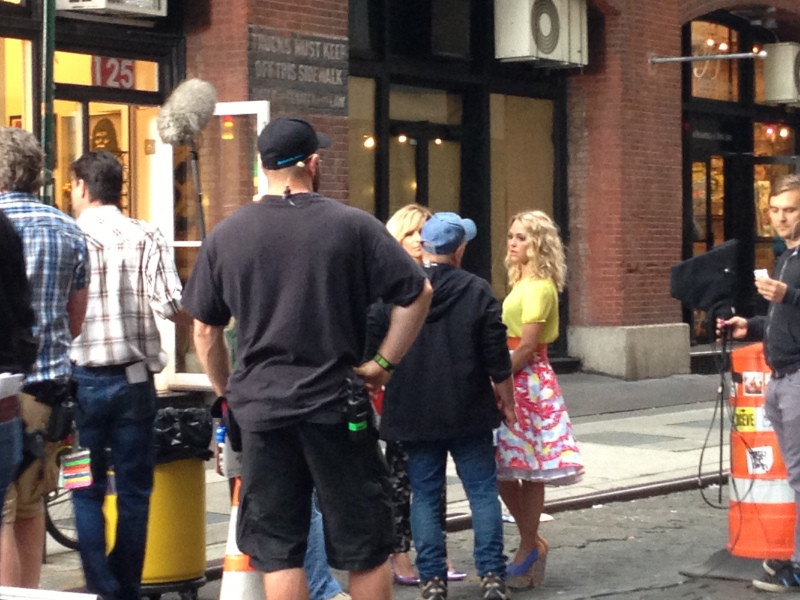 On Thursday evening, I had one of my New York City firsts: first time seeing the filming of a show/movie. While walking around SoHo with my best friend, we passed by Housing Works Bookstore and Cafe. I was in the middle of my “Oh that’s the bookstore whose profits go to New Yorkers with AIDS/HIV” speech when I noticed a crowd of people in front of it alongside an absurd amount of camera, equipment and bags. Out of curiosity we walked over.

Turns out they were filming The Carrie Diaries. Sure enough, AnnaSophia Robb and Lindsey Gort (who was just cast as Samantha) were literally across the street donning their extravagant and unrealistic ‘city daywear.’ I’m all for fashion and fun, but let’s just say that if Carrie wore those getups all over Manhattan, her feet would be as worn and busted as the cobblestone they prance on. But in the realm of the sparkly and safe CW world, the outfits were fabulous.

My best friend later informed me that AnnaSophia waved to her faithful fans in between filming. I must have been too busy capturing these Demarchelier-worthy photographs as shown below. Even though I don’t watch The Carrie Diaries (out of unwavering allegiance to the original Sex and the City), it was still pretty cool to stumble upon its filming. I guess I’ll have to watch this episode when it airs!

Her Other Lovely Sides
The Studded Collar

To Borrow or Buy

I determine whether you should borrow or buy a book so you don't have to.