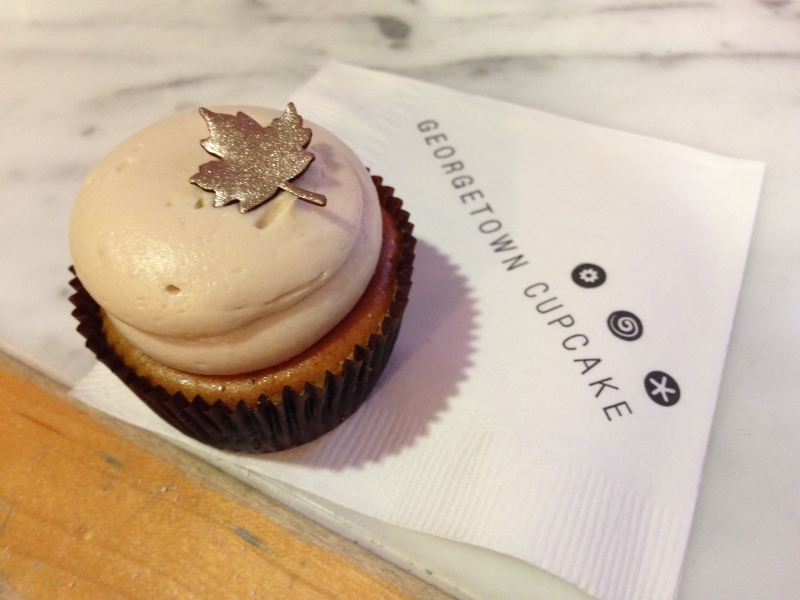 In tandem with my Baked & Wired post, I’ll catch up on my last special Georgetown Cupcake adventure. In October (I know, super long ago), I went with my best friend to try out the pumpkin cheesecake cupcake that our roommate recommended. I’d been a bunch of times before and a few times after.  The truth is that Georgetown Cupcake is insanely overrated; I went during GAAP weekend for the first time and did the typical touristy picture, once again when I moved into my freshman dorm, and several times after for birthday cupcakes/when the line was non-existent/when I was in emotional, desperate need of sugar.

Usually, campus events provide free Georgetown cupcakes so students eat them often enough without having to go to the storefront. Note: there is a Georgetown Cupcake SoHo location (that was literally a block away from my internship this past summer) so I went a few times when I was nostalgic. My favorite cupcake is the milk chocolate birthday (milk chocolate frosting with assorted sprinkles sitting atop of a vanilla bean cake), but this review is for the above mentioned and pictured specialty October option.

Price: $2.75+ (specialty cupcakes run a little pricier than normal ones)

Review: Surprisingly, this cupcake was delicious. I’m not trying to totally discredit Georgetown Cupcake, but the cupcakes usually entail ultra sweet frosting and a dry cake. However, this particular cupcake actually was a cheesecake. Yup, it was a pumpkin cheesecake with, I believe, a smooth pumpkin frosting. And it was moist, flavorful, and spiced. Aka a home run for Georgetown Cupcake.